Welcome to the Steam Revolution 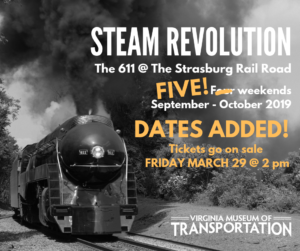 The Norfolk & Western Class J 611, a National Historic Engineering Landmark by the American Society of Mechanical Engineers, is known as an engineering powerhouse of steam, technology, and near mechanical perfection.

The Virginia Museum of Transportation, Inc., and the Strasburg Rail Road Company announce that the famous Norfolk & Western Class J 611 steam passenger locomotive will head to Pennsylvania’s Amish Country this fall for four weekends of special events and appearances.

The once-in-a-never events include being a passenger behind the famous locomotive on the Rail Road’s property, opportunities to operate and fire the locomotive, and cab rides. Photo charters, classic car shows, educational behind-the-scene shop tours, and family-centered events will round out the exciting four weeks.

“Since its restoration, the Virginia Museum of Transportation (VMT) has sought opportunities for the 611 to engage people from all walks of life,” said Brian Barton, VMT board member. “The partnership with the Strasburg Rail Road allows us to spark a fascination with steam locomotives and transportation, our history, steam technology, mechanical engineering, and design.

The Revolution of Steam

“Reuniting 475 and 611 is a rare opportunity for railfans and heritage railroad tourists alike,” said Steve Barrall, station master at Strasburg Rail Road. “When the two locomotives are side-by-side, you will see, hear, and feel how the Norfolk & Western Railway revolutionized steam technology in under 50 years.”

The N&W Class M #475, a 4-8-0 locomotive, was built in 1906 by Baldwin Locomotive Works and put into service by the Norfolk & Western hauling freight and coal trains. Soon after, the railroad decided to design and build its locomotives using cutting-edge technology and engineering.

The N&W Class J 611 is the sole survivor of 14 Class J steam locomotives designed and built by the Norfolk & Western Railway. The locomotive rolled out of Roanoke’s East End Shops in 1950. Its mission was to pull the Powhatan Arrow, a 15-car passenger train, from Norfolk, Virginia, to Cincinnati, Ohio.

The special events at the Strasburg Rail Road include:

Tickets can be found at strasburgrailroad.com.

Norfolk Southern was instrumental in bringing the two organizations together. “Without the support from Norfolk Southern, the VMT would not be allowed to ferry the locomotive to special events,” Barton said. “For the safety of the railroad’s crews, railfans, and the general public, the ferry moves will not be announced beforehand.”