“It is a story of vision, of human effort toward that dream, and of accomplishment.”

Here in Roanoke, the Norfolk & Western accomplished the extraordinary—they designed, built and maintained the most powerful, the most distinctive and the most advanced steam freight and passenger locomotives in the world.

Three examples of Norfolk & Western’s incredible accomplishments survive today: The Class J 611™, the Class A 1218 and the Class Y6a 2156 (on loan from the Museum of Transportation in St. Louis, Missouri.)

The Virginia Museum of Transportation tells the N&W story so that future generations can see steam technology up close, and understand America’s industrial power and how the railroad helped to build our country. 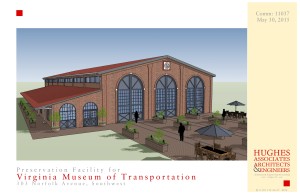 To preserve, protect and maintain the Norfolk & Western Giants of Steam, the Virginia Museum of Transportation is building an Preservation and Education Facility.

The facility will help the Museum preserve the Class J 611™ and sustain the donations made by thousands of 611 fans from around the world who have contributed to Fire Up 611!

The three-track, climate-controlled facility will also protect and preserve the Class A 1218 and the Class Y6a 2156 steam freight locomotives.